I like a geeky knitting project once in a while, and what better reason to cast on than the 50th anniversary of Doctor Who? I'm going to see the anniversary episode in 3-D (thank you, Lisa!) and I wanted something suitable to wear...fannish, but not full-on Doctor Who scarf fannish, and preferably something I could work into my wardrobe.

Anyway. I poked around a bit on Ravelry, and eventually I landed at the Tilting Tardis Cowl. Working part-time at a yarn store meant I had lots of opportunity to peruse the shelves for the most Tardis-like (and most wardrobe appropriate) blue. Tanis Fiber Arts yellow label in midnight: hello! 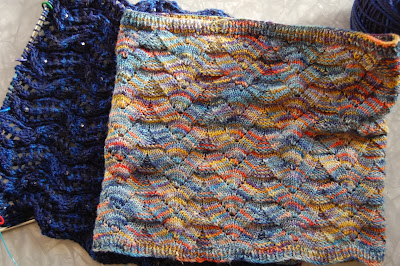 I've been knitting away diligently for a couple weeks now – a Tardis here, a Tardis there. And then today I looked at it compared to another favourite cowl of mine (above) and realized that I wasn't happy. I didn't want a wrap-around, button-up cowl with Tardises flying sideways. I wanted one that didn't need buttons, with Tardises that flew up and down. I pondered this a little, and then out came the darning needles and the scissors. 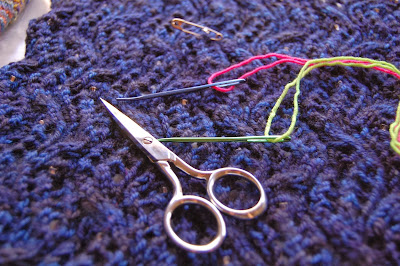 The idea was that I'd find the height I wanted on the piece I had, then cut the excess off the top. That would allow me to pick up three sets of stitches: at the top of the larger piece to knit the top border; at the bottom of the shorter piece to knit the bottom border; and at the top of the shorter piece to knit a few more pattern repeats and a border on the top. After that, all it would need would be a bit of seaming up the sides to create the actual cowl. Not as easy as knitting it in the round from the get-go, but I wasn't about to rip the whole thing out and start from scratch. 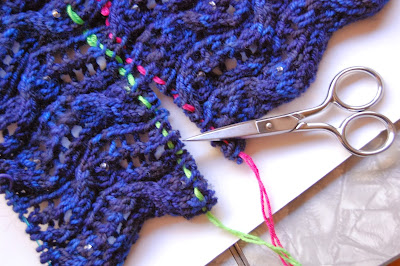 Two steeks does not an expert make, but I long ago discarded the idea that anyone other than me is the boss of my knitting, and if I want to cut it, I cut it. What's the worst that can happen, really? Bolstered by this (over)confidence, I roughed in some lifelines and snip, snip, snipped away, all the while with a little niggling voice chattering away in the back of my mind. A chattering voice that actually sounded a lot like it was reciting Elizabeth Zimmermann's discourse on mitten thumbs in Knitter's Almanac.

Oh right. According to EZ, if you're cutting into knitting horizontally (as you would for an afterthought mitten thumb, for example, as opposed to vertically, as you would when steeking a cardigan), you just need to snip one stitch in the middle of the row and (un)ravel sideways from there. It's a neat, tidy solution. Of course, it was a bit late at that point.

The rest of the cutting was the work of a moment, although unravelling to live, unharmed stitches took a bit longer than I'd anticipated, and I ended up losing about four rows of knitting along the way. But it was worth the sacrifice to get a little closer to the cowl that I want. 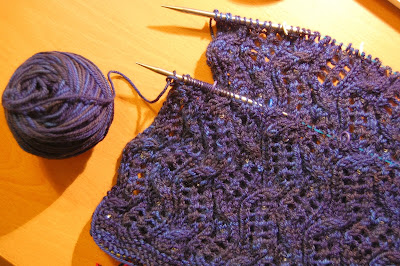 I've got about 15 rows to go to catch up to the first piece, and then I'll figure out where I want to stop and add the top border. Easy-peasy. At this rate, I might even finish early. Chop chop!