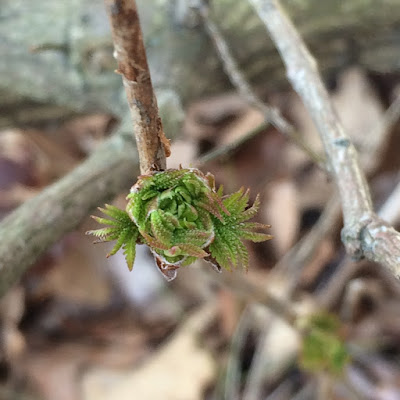 Today I saw the first tiniest green leaves on a tree that I pass on my way into work – so startling in their verdancy that I stopped and backtracked, sure that they were a joke, glued on as a trick. But no: they were the real thing. Look at that tiny green minutely detailed magic. It's a miracle.

At some point last June, sitting in my office with the window open, I looked up in astonishment at the sound of running water nearby. But no: the wind had picked up, and I was hearing the sound of the breeze in the birch trees. Over the course of the brutal winter, I had completely forgotten the sound of rustling leaves. I knew the sound of shovels against ice; the squeak of boots on pack snow; the particular series of bangs that the snowplow made as it dropped its blade and headed up the hill outside my house. I'd forgotten the rustle of leaves and the patter of rain and the flirtatious peeping of chickadees. Everything was winter.

Indeed, at some point, maybe around the time the third metre of snow fell, the idea of ever seeing green again – let alone there being so much green that I could actually hear it – had stopped to even feel like a possibility. I didn't even note the lack until it had been filled again. How often does that happen in other aspects of life? What else am I missing? I can only hope that if I keep my eyes and my ears and my heart open, I'll notice it when it comes around again.