It seems like everyone is talking about colouring books. They are vaunted as a way to slow down, a way to refocus, a way to be more mindful, whatever. I was never good at colouring, even as a child; I wasn't great at colouring inside the lines and I was completely unable to see the utility of the process. A book of coloured-in pictures is still just a book of pictures. Why bother colouring-in when you could read? I wanted words. I still do. 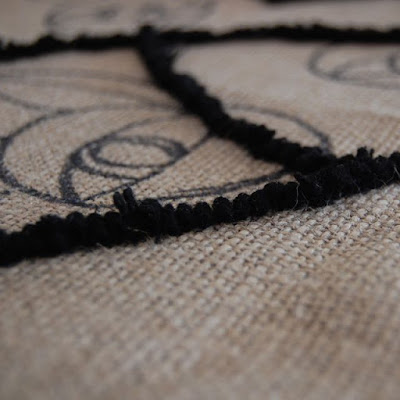 But sometimes it is good to slow down, to play with colour, to immerse yourself in another realm. Much beleaguered by a week of non-stop editing (file under: be careful what you wish for) and bitterly cold, snowy weather, I turned my thoughts to the rug-hooking project that I started last fall.

The process is basic: use a tiny hook to pull loops through gaps in the linen – heaven forbid you should call it burlap – until you've drawn the outlines, then repeat the process to fill in the spaces with blobs of colour. As you can see, I got tired of the lines. It's cold and grey outside; I needed some red. 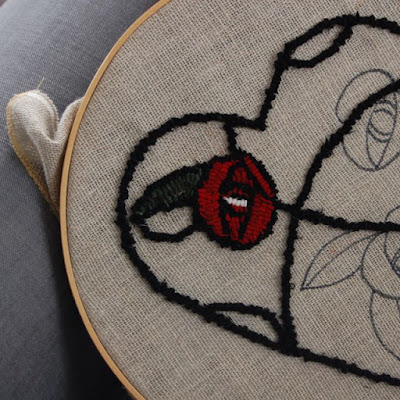 It's a simple process, using simple materials; one of those crafts that obviously had its origins in necessity and thrift. (I wouldn't want to explain to a local grandmother how much I spent on the class, or the materials.) These days, of course, the rugs are more likely to be made from new materials, some quite expensive; rather than workaday floor coverings, they're works of art.

Sitting on the couch after dinner last week, tensioning the wool strips with one hand while the other hand guided the hook through the linen, trying and failing to catch the strip, trying again, and again, I thought about that cold fall day that we sat in the rug-hooking class. There was a fire in the wood stove; the trees were just past peak colour, but bright reds and oranges were still visible through windows rimmed with the first of the year's frost. We ate trail mix and drank tea in mugs with the bag still in, and we worked mostly in silence, except when the teacher regaled us with tales of her former life as a fabric buyer for fashion houses in England, and during the short pauses we took to look up, flex our fingers and stretch our necks, and trade some gentle gossip. 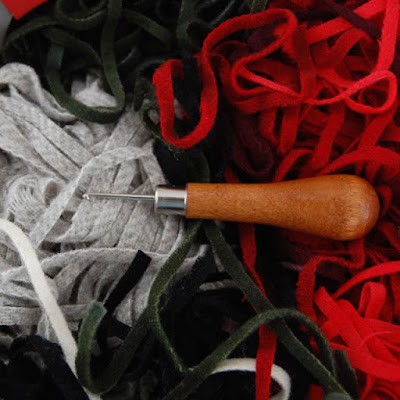 It's challenging to learn something new as an adult; mentally and physically exhausting. Sitting at that table, I was so frustrated: I can knit and crochet and sew and embroider, I kept thinking, why can't I do this? I kept shaking out my hands, as though that would help get the knowledge from my brain down into my fingertips.

Thinking back on it now, it occurs to me that the tiring part of learning something new, at least for me, might not be in the assimilation of new information, but in quieting the critical voice and replacing it with the voice that I try to use around new knitters, the one that is patient and encouraging, that says, When's the last time you learned a brand-new physical skill? Driving a car, right? Be easy on yourself. Don't give up yet.

(That, of course, is one of the secrets of life. Find the balance between being easy on yourself and not giving up: it works for more than learning rug-hooking.) 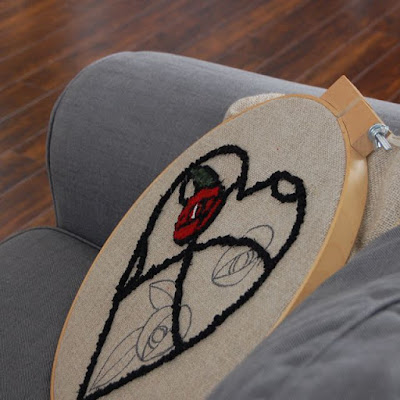 So here we are. I've got the basics down now, and it's getting easier, but it still requires me to sit, head down, brow furrowed, in concentration for half an hour at a time. As I do, the cares of the day fall away; by the time I'm on my third or fourth strip of wool I've mostly forgotten the emails that didn't arrive; the meetings that took too long; that errant semi-colon and the perfidy of spell-check. That doesn't happen for me with knitting any more; one day it won't happen with rug-hooking, either. Maybe then I'll have to take up tatting...
Posted by Austen at 2:07 PM