I'm an all-Canadian Red Rose girl when it comes right down to it, but in the middle of a heat wave, sometimes even I have to relax the rules. Desperate times and desperate measures, you know.

So when one of my friends suggested tea popsicles as an antidote to the hot, humid weather, I was on my way to David's Tea for the perfect iced-tea brew in a flash. I got a few iced-tea tips from the girl behind the counter (double the tea content and the brewing time, add lots of ice), and away I went with a brand-new bag of Cranberry Pear Tea in hand. 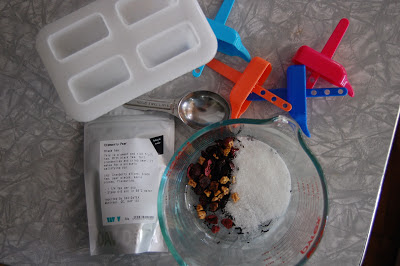 Each of the wells in the popsicle mould holds a generous 1/3 cup of liquid. I did some fake math and then winged it, adding 1 tbsp of tea and 2 tbsp of sugar (though you could use honey or whatever you fancy) to my liquid measuring cup. 1-1/3 cups of boiling water later, I was in business. A lunch plate stood in for a lid while the tea steeped... 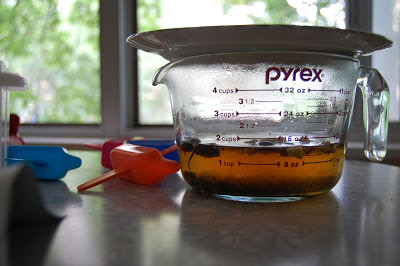 ...and I cleaned out the freezer. As you do, when popsicles are involved. I strained the tea through a strainer, picking out the berries and bits of apple and pear to add to the popsicle moulds for extra fanciness. Then it was just a matter of pouring the tea over top, snapping the lids on and waiting. 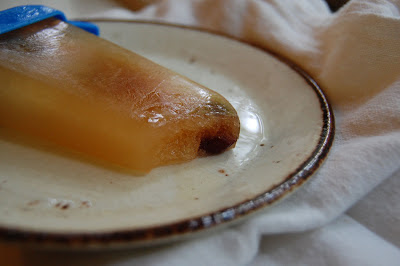 Yep, that's an iced tea popsicle, featuring a delicious fancy cranberry. I think I could do with a bit less sugar next time, but I was pleased with the subtle flavour of the tea and the fruit. It was cool and refreshing – just the thing for a day with 90% humidity!

Now, if only I could figure out a way to dip my Peak Freans shortbread in it....
Posted by Austen at 12:31 PM

Email ThisBlogThis!Share to TwitterShare to FacebookShare to Pinterest
Labels: handmade life, in the kitchen