When darning isn't enough (a tale of two socks)

The thing about becoming a sock knitter is that it doesn't take long before you also become a sock fixer. Especially if, like me, your favourite sock yarn is 100% merino, and your favourite mode of transportation is walking. 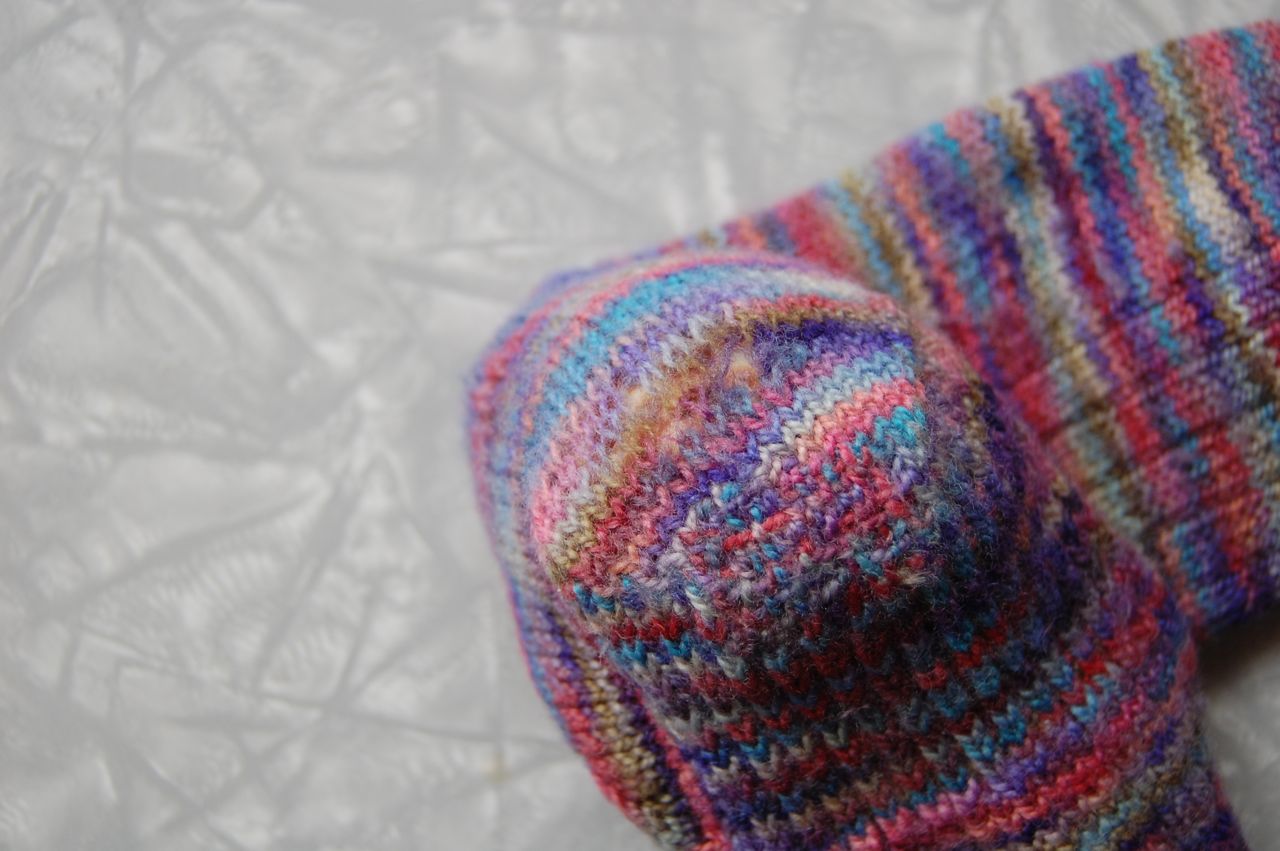 This sort of situation isn't hard to fix – and you can see that I've already darned this sock at least once. That's just a matter of getting out a darning needle and spending a bit of time weaving things back together again. 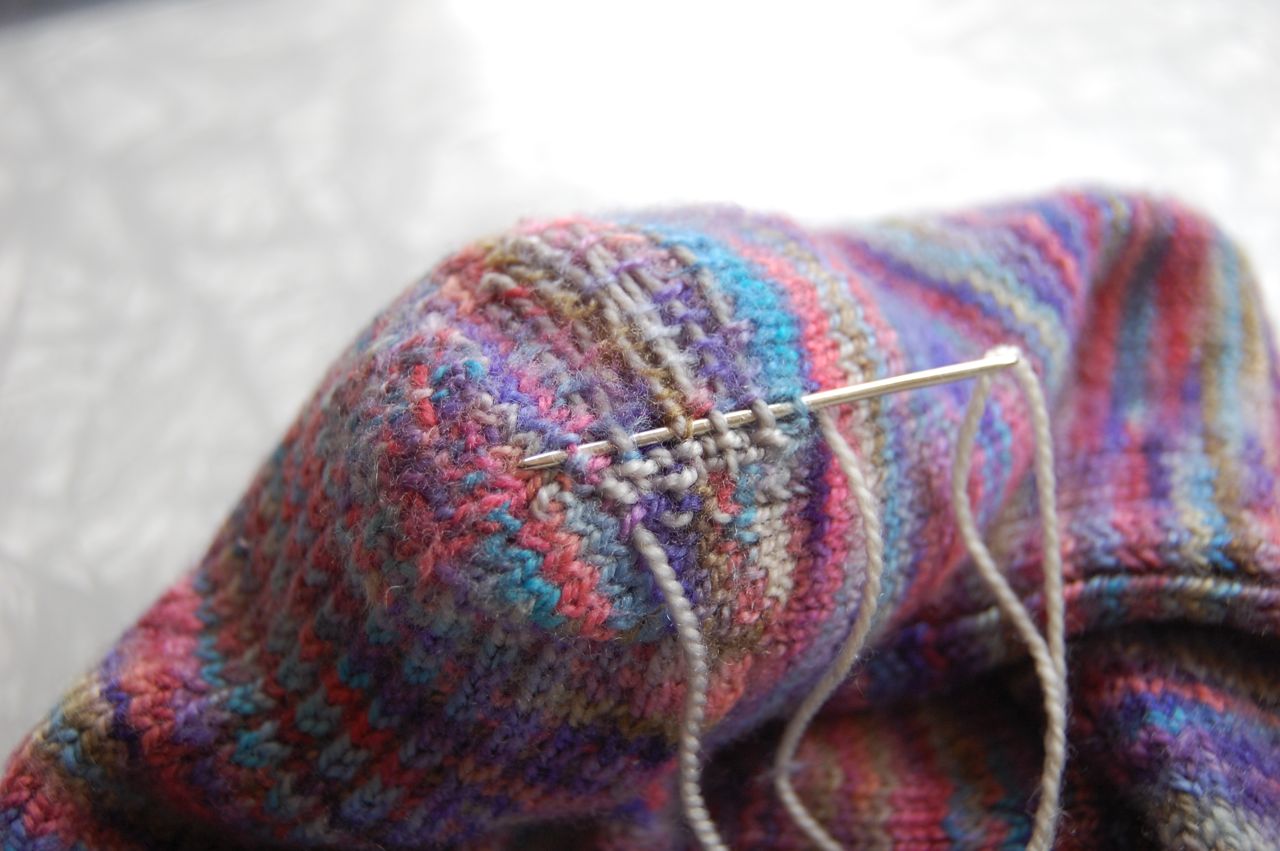 Easy. (No, really: easy.) But the second sock of this pair was another matter entirely. It wasn't thin...it was downright holey. 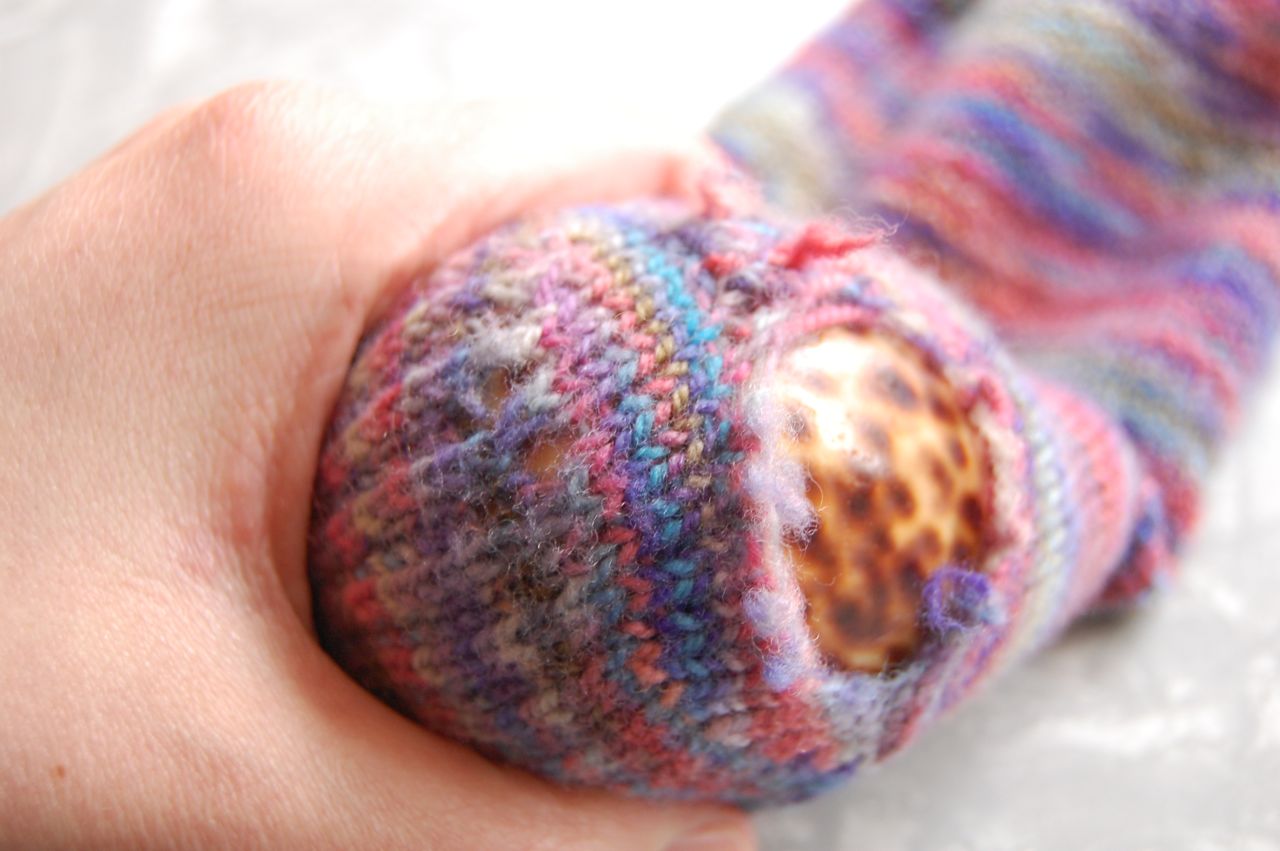 I knew about the two big holes, but I didn't see the smaller ones until I put the darning egg (it's actually a sea shell) into the sock. Not only was it practically disintegrating, but it had also taken a trip through the washer and dryer (whoops!). I've been wondering if I could figure out how reknit the heel of a sock, and I figured that this was the one to experiment on. 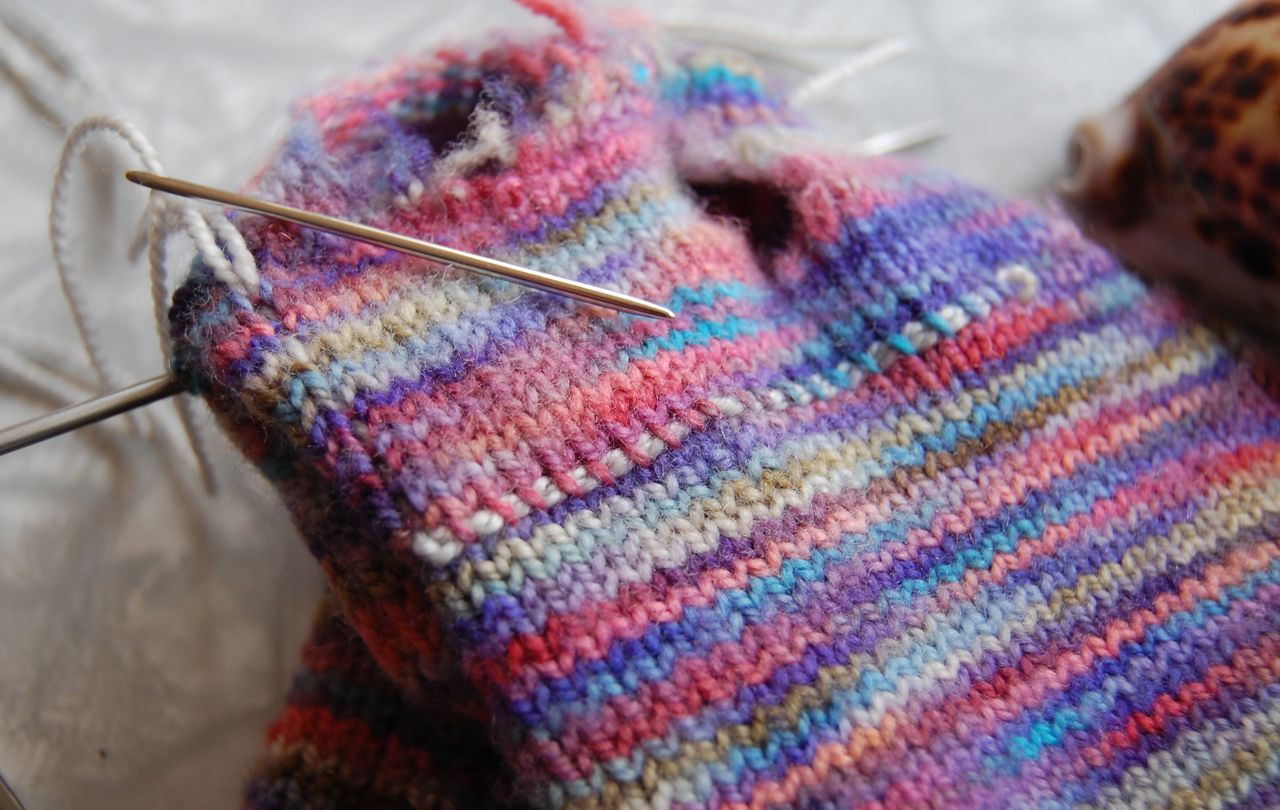 The first thing I did was to put in a lifeline. Thanks to the magic of wool, I wasn't too worried about runaway stitches, but a little insurance never hurt anyone. It also made it easier for me to cut in a straight(ish) line when I snipped out the heel. 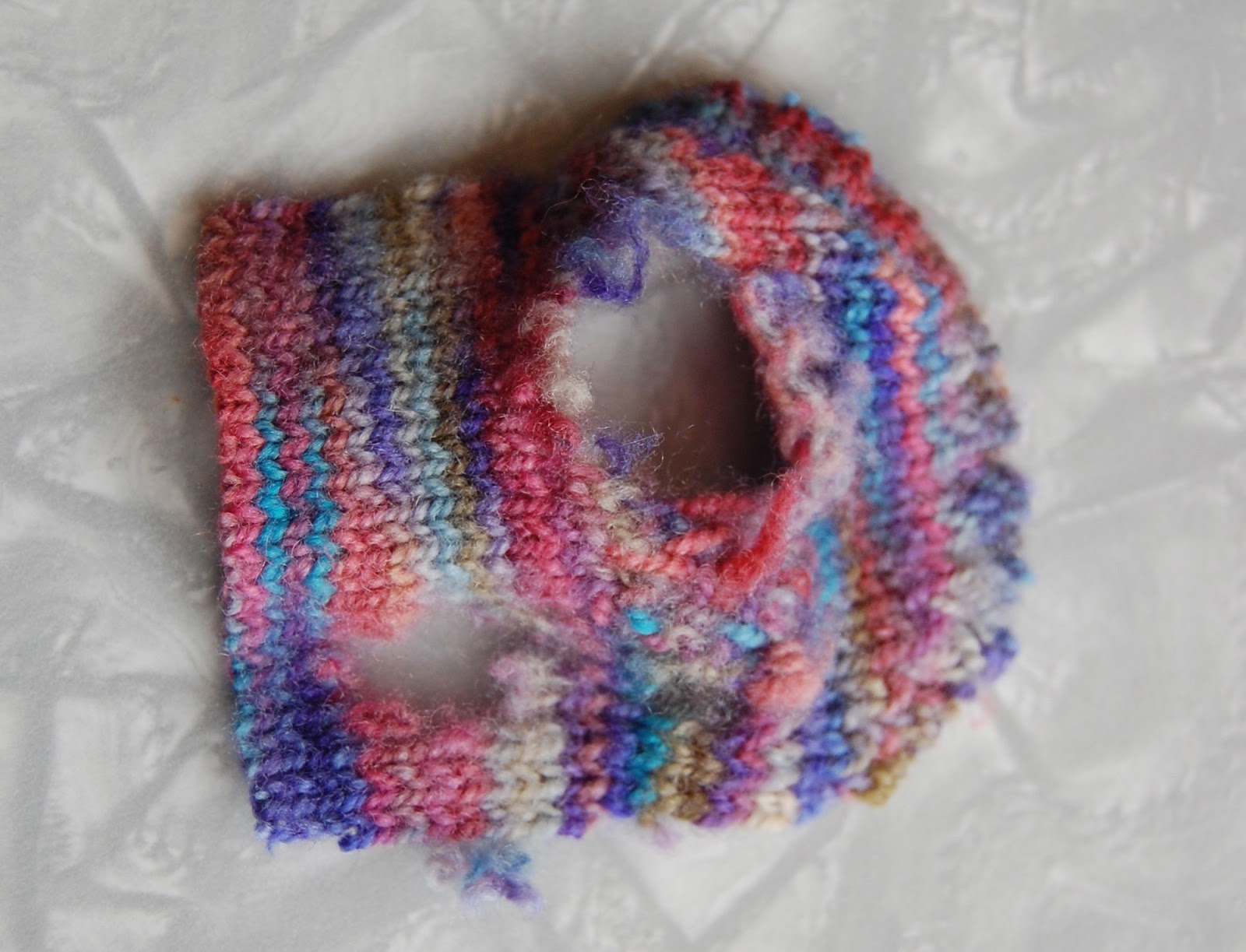 Next, I picked up stitches, starting at the heel flap, then working up the side of the foot, across, and then down the other side. 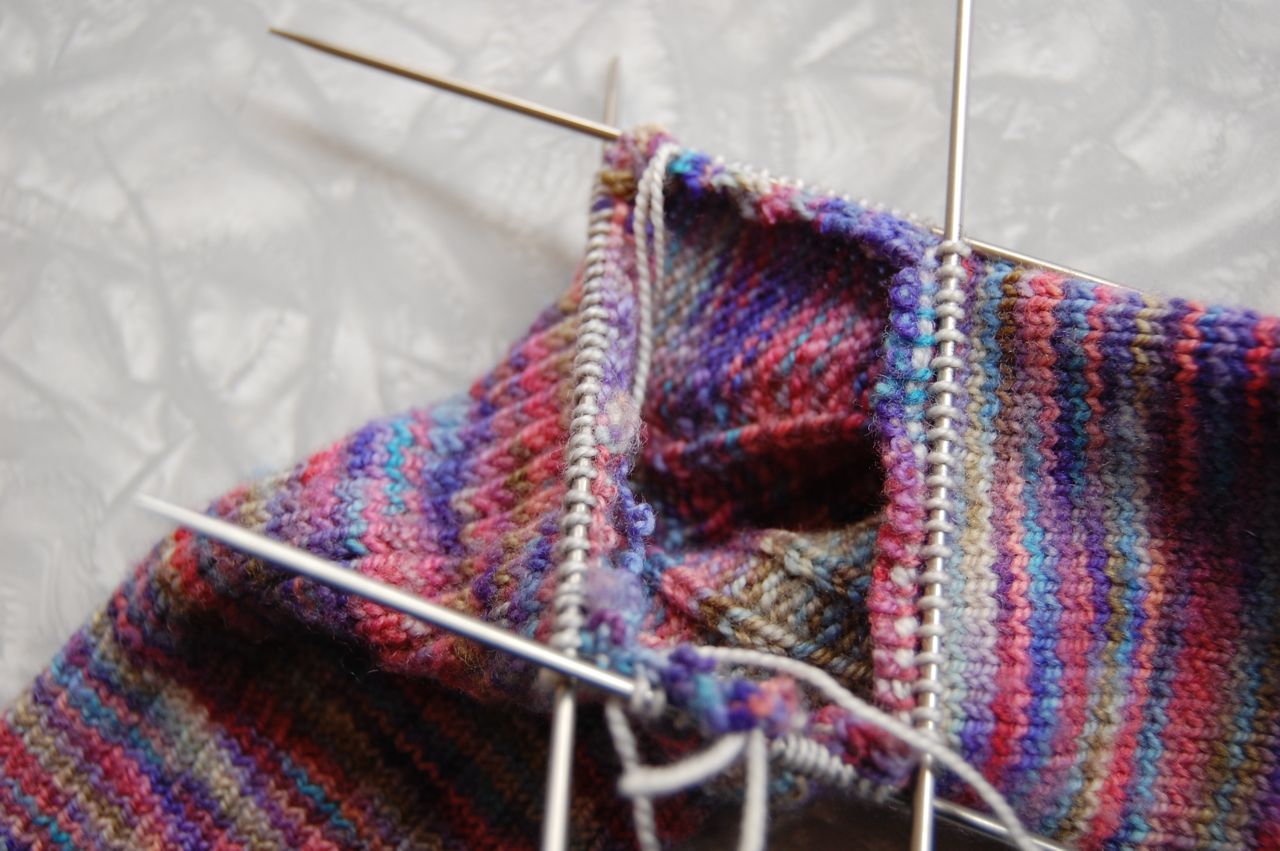 I didn't worry too much about the numbers at this point – well, I knew there were 32 in the heel flap, and I tried to make the number of stitches on either side match. But I wasn't too fussed about it. 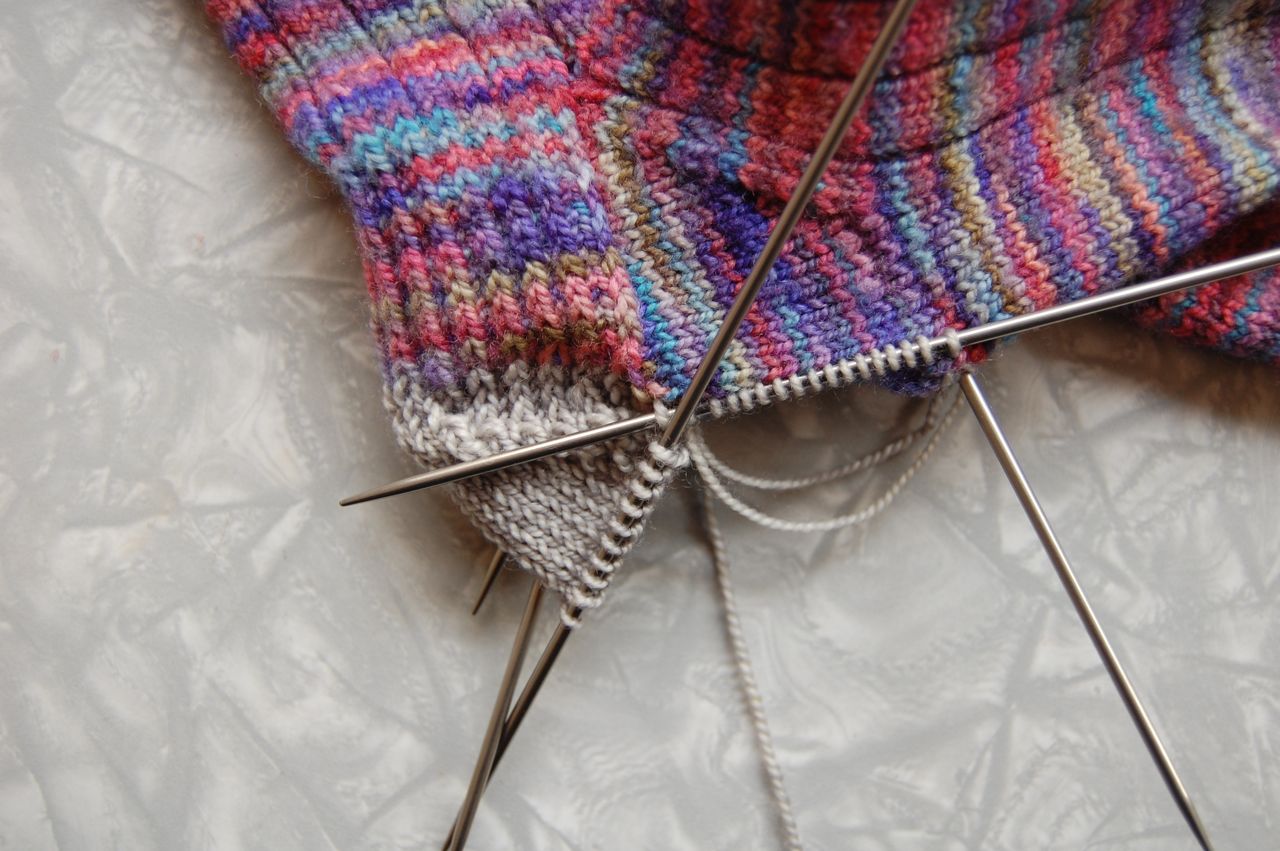 Working back and forth, I put in six rows on the heel flap, picking up with the same k1, sl1 from the pattern. Then – again, following the pattern – I turned the heel.

When that was finished, I put markers on either side of the 18 heel stitches, then picked up 5 stitches from either side of the heel flap. Working back and forth, I faked a gusset by decreasing on the outside of each marker on every other row until I had 22 stitches – which matched the number of stitches that I'd picked up further up the foot. 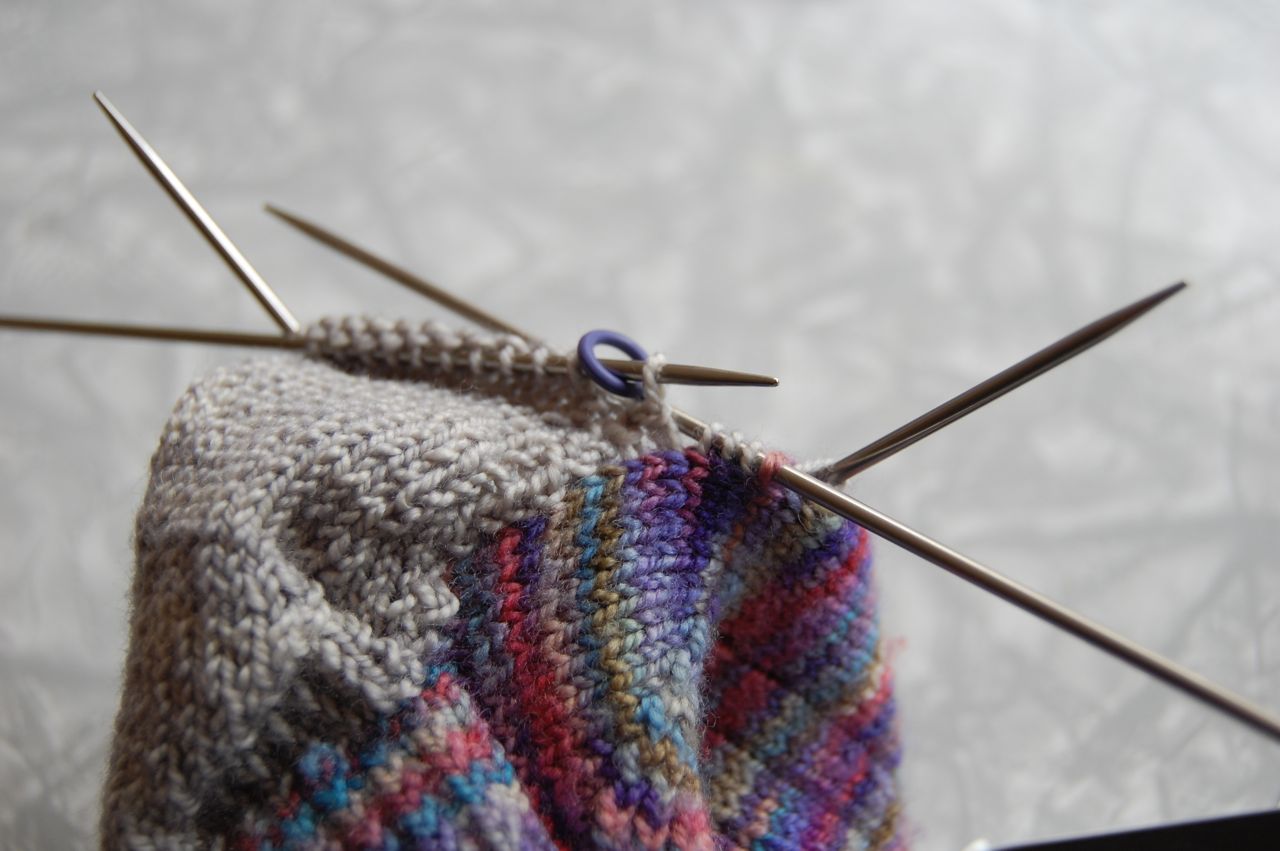 It looks a bit like Frankensock, but you get the picture. 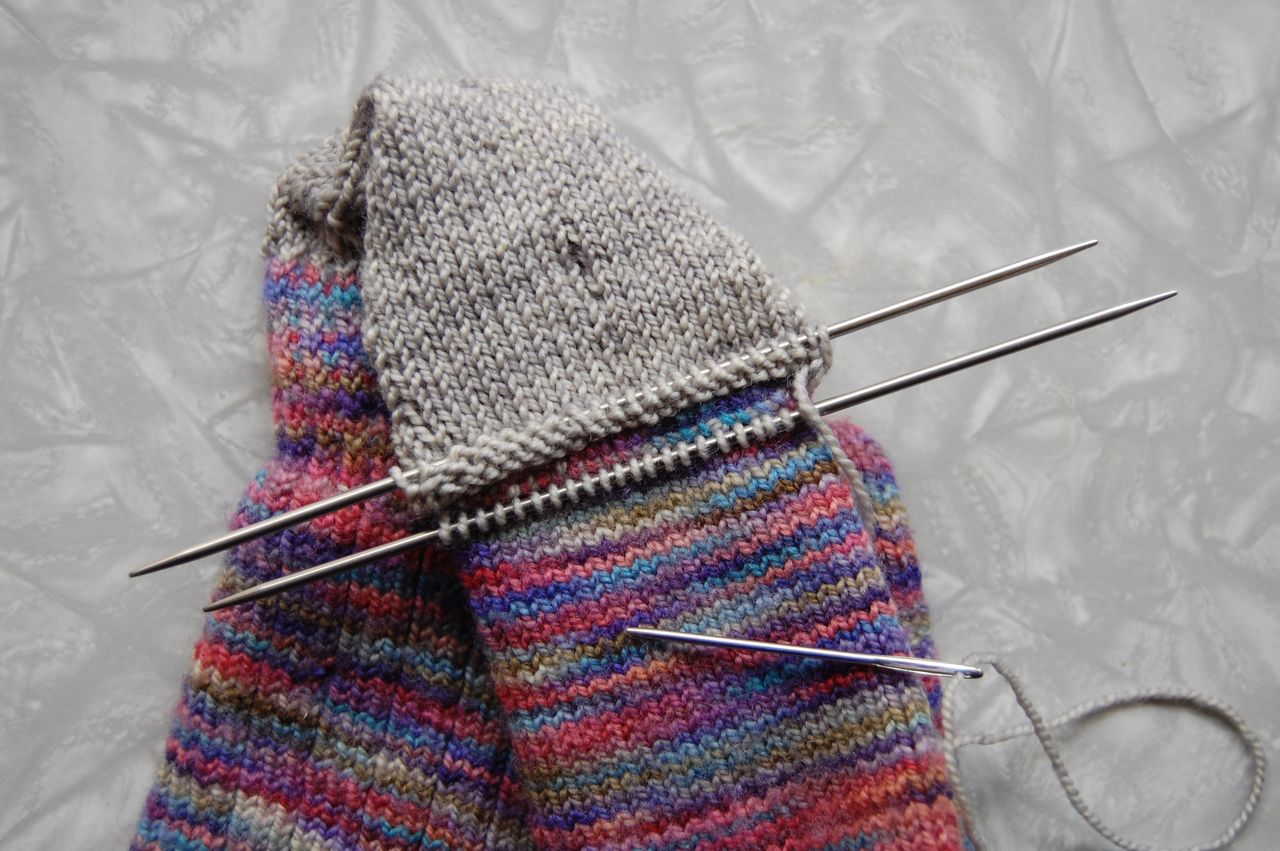 When I'd knitted each of the side stitches, it was time to graft the old part to the new part. A little bit of Kitchener stitch was all it took. 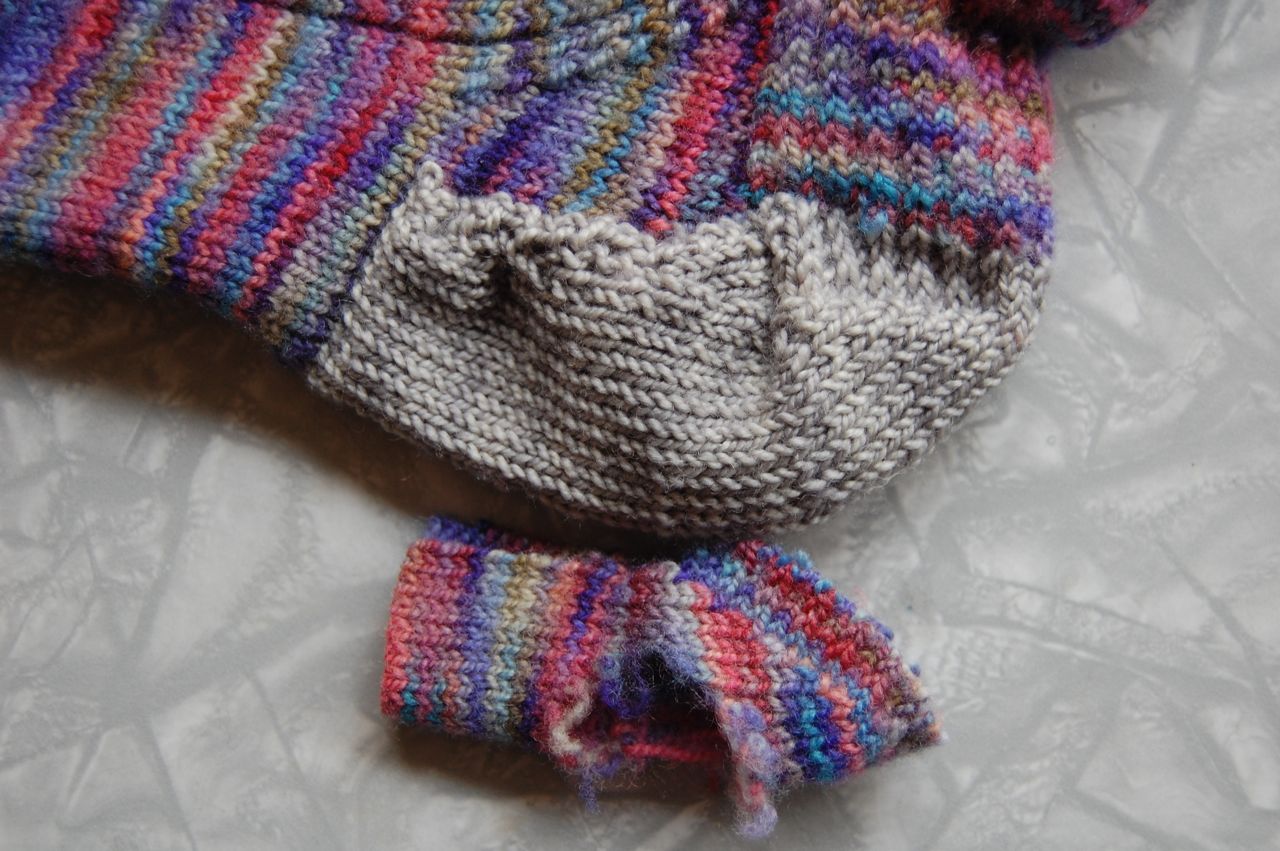 It's not a perfect fix – that trip through the dryer means that that the body of the sock was smaller and denser than it was at first, so there's an inherent size mismatch between the old sock and the new heel. And I could definitely find a neater way to join the edges. But still: an old sock with a new lease on life. 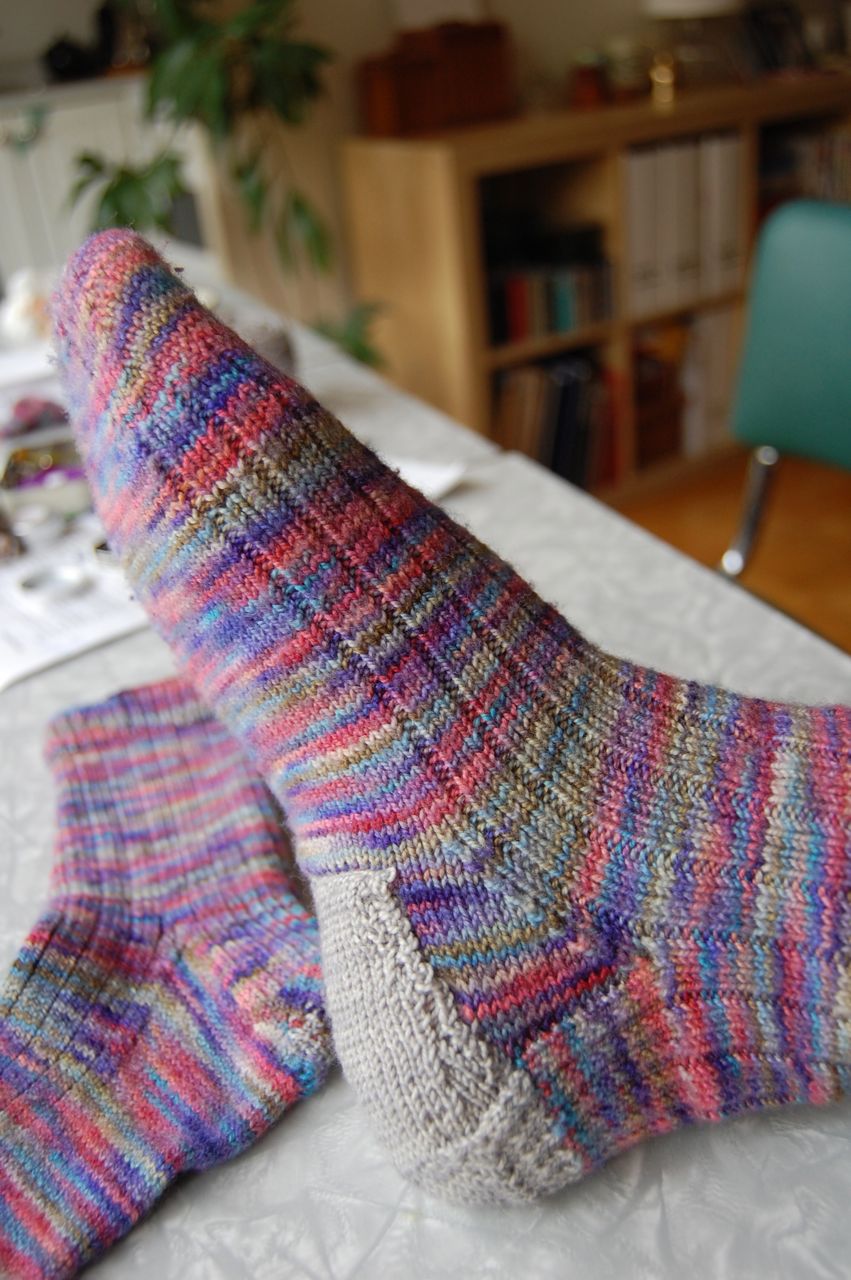 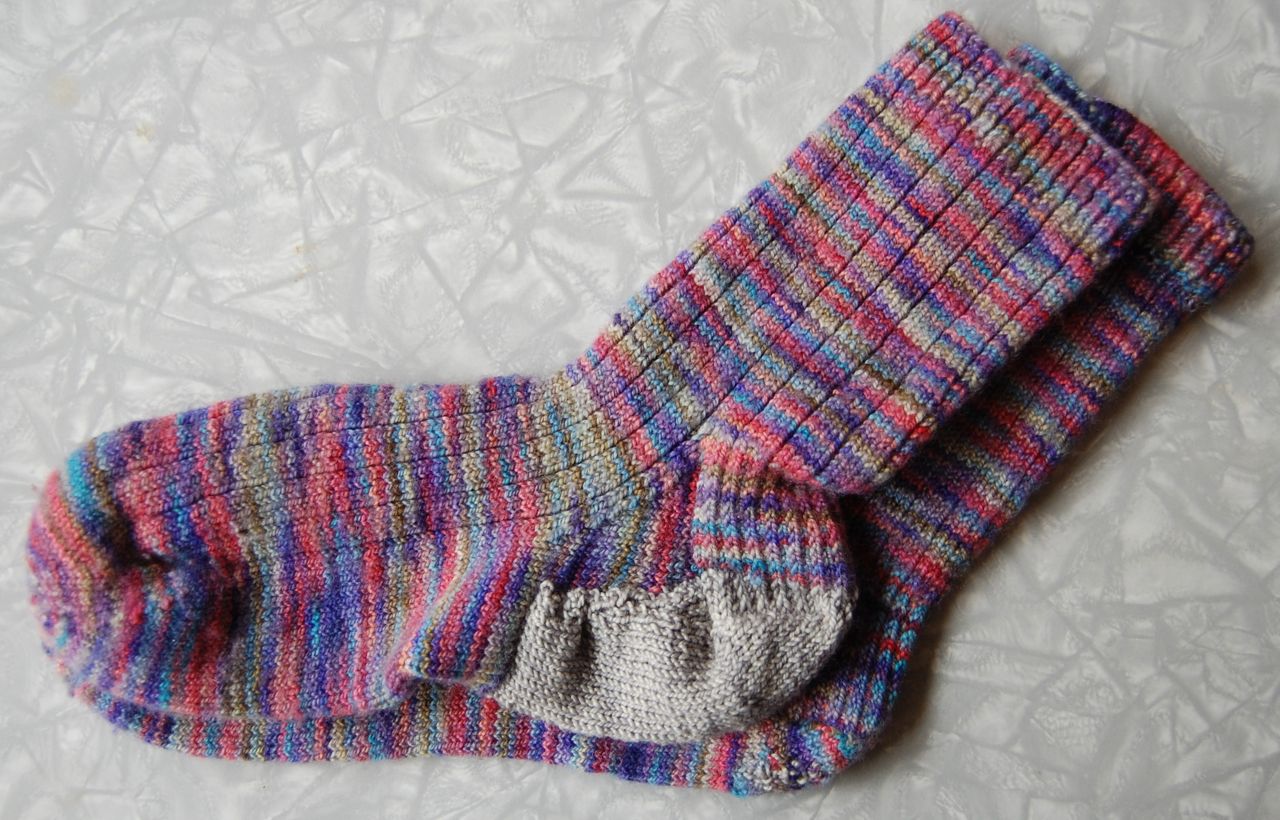 I have to admit that I'm pretty proud of myself for figuring this out. I've read enough Elizabeth Zimmermann and Ann Budd to know that fixes like this are possible, I guess – and when it was time, the theory behind the afterthought heel and EZ's moccasin socks had tumbled around in my brain long enough that something like this finally found its way out my fingertips. (I guess that having 25 years of experience counts for something.)

To me, this sort of thing is what craft is all about. It's about learning a skill, and then perfecting it – slowly, a bit at a time, over an extended period. It's about challenging yourself; trying and failing and trying again. It's about solving problems, building a skill set, learning from others and learning from yourself. It's about creating a narrative, or finding your place in a larger story. It's about taking pride in your work – and valuing the things you make so much that you use them, appreciate them, take care of them and learn to fix them.

It's a sustainable approach, and – in a world where so many things are instant, ephemeral and disposable – it's also sustaining.
Posted by Austen at 5:37 PM