A whirlwind adventure (and socks, and a kitten)

July was originally scheduled to be, basically, the best month ever – a trip out east followed by a week at a cottage – but my plans were then rescheduled for work, then re-rescheduled for a more compact work schedule, which was interrupted after the eighth of ten consecutive workdays by a vicious round of the stomach flu.

So, not exactly the month I'd had planned. The fourteen days of vacation I'd had on the calendar were distilled into a single day. But it was a day with a ferry ride and glorious blue skies; beach play, barbecued burgers, potato chips and chocolate chip cookies; and a pretty nice sunset... 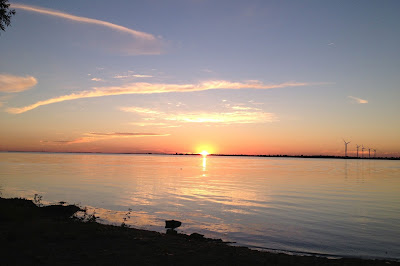 ...plus a campfire, a card game and toddler cuddles, and a stop at the bakery on the way home again. It might only have been 24 hours, but it was pretty great. 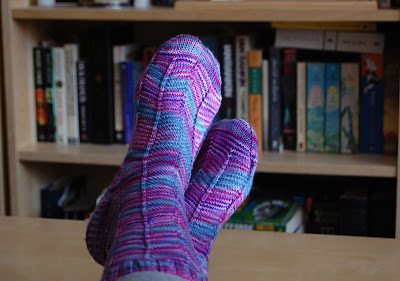 In other news, I finished my Jaywalkers. I'm really pleased with how they turned out – I'll be making this pattern again. I totally lost the plot on the toe shaping on sock #2 (I'm putting it down to fever knitting while I was sick), but I reckon that there aren't too many people who'll be double-checking the stitch count on the bottoms of my socks, so I just went with it. I'm not always that laissez-faire about my knitting, but sometimes you just need to roll with it.

I also whipped up a kitten. After surviving the world's most frustrating (and, let's face it, most disgusting) week, I was seized with the desire to Just Finish Something Fun, and tiny stuffed toys always fill the bill. 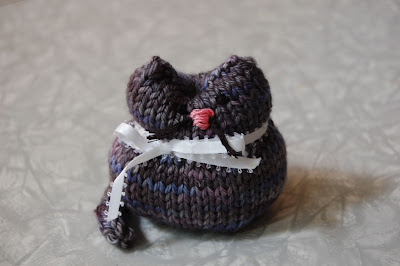 Blue is a tiny, very roly-poly cat who will be going to live with a young friend of mine. The pattern couldn't have been easier and it worked up in less than half an hour, with the barest minimum of yarn. (Also, he's part cashmere, so obviously the softest cat in the universe.) Very, very satisfying.

Have a great week, friends.