In the first class, we learned about the history of spinning, different kinds of fibre and spindles, and different spinning techniques. Fascinating stuff, and so important to the development of human civilization...but there's no time to get philosophical, because spinning is actually a lot of work. 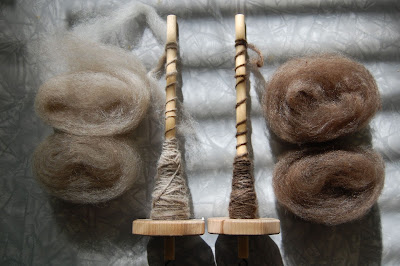 I came home from the first class with two big batts of fibre – one light, one dark – and the instructions to spin as much as possible over the following week. (The fleece in that photo represents about 1/30th of what I brought home.) By yesterday afternoon, I'd spun about 100 grams of single ply yarn, my desk was covered in a fine layer of sheep wool and vegetable matter, and I'd watched a LOT of Netflix. I wound the yarn into balls and headed off to learn to ply. 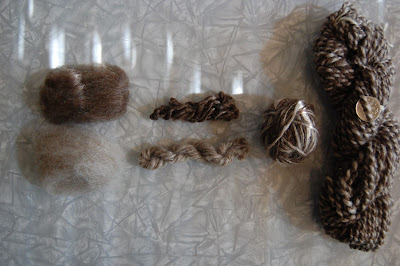 One of the things I liked about this class was Denny's insistence that we don't really need any special (read: expensive) equipment. Instead of faffing about with bobbins and so on, we simply wound our two balls of yarn into one, pairing a strand of dark with a strand of light. Then we tied the ends in a knot and used the drip spindles to ply, twisting in the opposite direction than we used to spin. 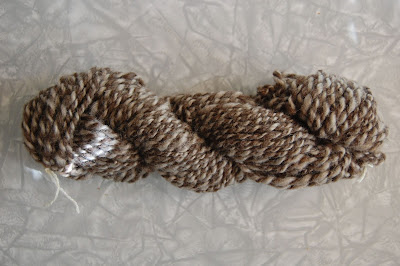 It's chunky, sheepy, ragg yarn – this skein is about 60 g worth, and I imagine I could probably work up another 40 g or so. I imagine I'd need to use at least 6 mm needles to knit it up... 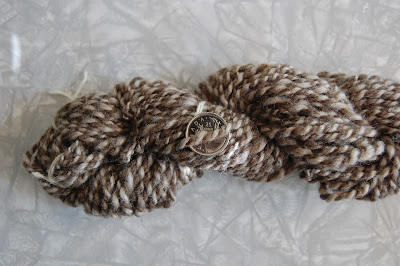 ...though I'm still not sure what it would make. A very homespun tuque, perhaps?

I'm still not sure I'll ever feel about spinning the way I feel about knitting. However, I think it's a worthwhile pursuit just because knowing first-hand the effort that goes into preparing the fleece and spinning, plying and blocking the yarn helps me better appreciate the yarn I use every day. It's similar to the way that the act of making my own bread helps me appreciate the bread I buy from my local bakery. Besides, whether you're talking yarn or bread, knowing how to make it yourself is still a pretty cool party* trick.

*It's possible I have different ideas than most people about what constitutes a cool party and/or cool party trick. I am OK with that.
Posted by Austen at 11:25 AM