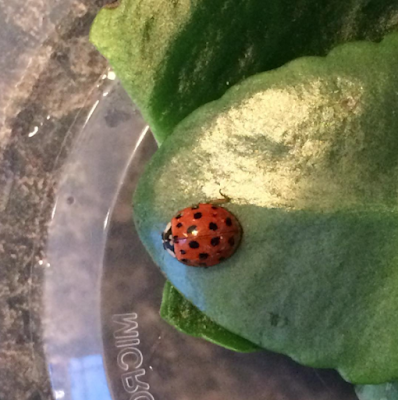 Just in case you were worried I was going to write about poetry all the time now (but what about the knitting, Austen?!? the people cry), I thought I'd take a break to introduce you to my new pet, George.

I opened my eyes after rinsing the shampoo out of my hair this morning to be confronted with the sight of this little guy marching determinedly across the bathroom ceiling. I wasn't sure where he came from, where he was going, or what exactly he's doing awake on March 15 (it's warmer than it was this time last year, but not by that much), but I was sure that he couldn't stay where he was.

And that is how I found myself standing at the kitchen sink, wrapped in a towel, constructing a makeshift terrarium (i.e., using a steak knife to stab holes in the lid of a Thai takeout container) at 7:15 this morning.* A rather wilty-looking houseplant sacrificed a few leaves to the cause; I might throw a carrot top in there later. (I should figure out what ladybugs eat, I guess, and how long they live.)

*Sometimes it occurs to me that certain aspects of my life would be easier to explain if I had a six-year-old. This was one of those times.
Posted by Austen at 9:45 PM