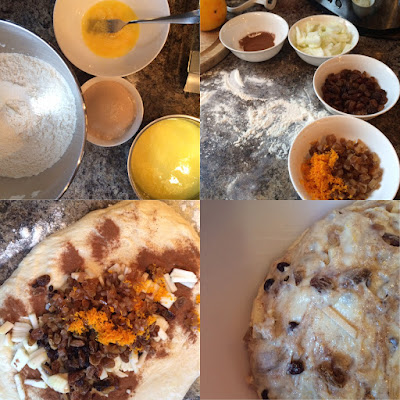 Good Friday: one of those days when it always seems to rain. It's pouring now, but the downpour held off for most of the day – though heavy mist meant that foghorns were the soundtrack while I baked these hot cross buns. 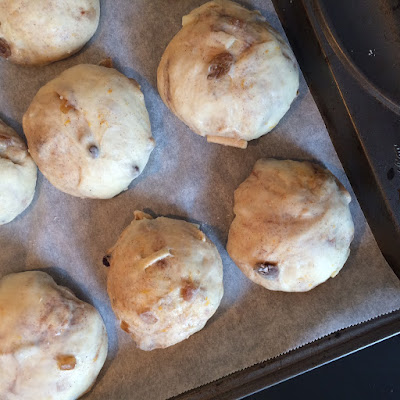 The hot cross buns of my childhood came eight to a purple-printed bag and I suspect they weren't much more than a glorified hamburger bun spiced up with cinnamon and whatever was left from the Christmas fruitcakes. But they were a special treat each year, and I still remember them fondly. One year I tried six different recipes to try to recreate them. No luck. This year, though: success. 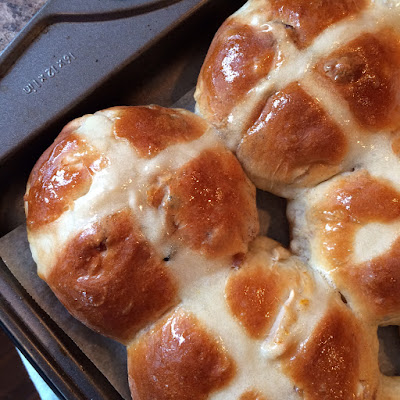 I used this recipe, which was both hilarious and instructive. My only modifications were to change the type of yeast (I used regular, not instant, because it's what I had on hand; I decreased the amount of milk accordingly) and to soak the raisins/currants in boiling water for 10 min before draining, patting dry and adding to the dough. Oh, and the glaze is a bit of honey mixed with hot water, because I didn't have any apricot jam.

The recipe yielded 15 sizeable buns, dictated mainly by the room I had on the baking sheet and my desire not to faff about with turning and switching pans. I should have organized a tea party...