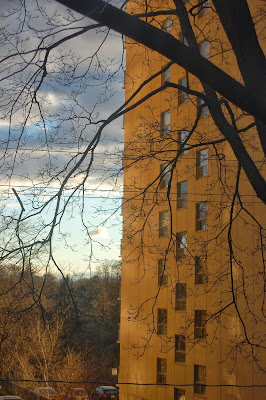 The sky this morning was amazing. Just for a minute, everything seemed to glow.

Later, after the clouds had won the day and the temperature had plummeted and I was on my way home, I was caught in a flurry of pebbly snow. You know the kind: looks like styrofoam, feels like an insult. It bounced around on the sidewalk and trickled down the back of my neck and was over as quickly as it had started. Half a block later it had all melted; the merest preview of what's to come.

Even later still, after work and after dinner, I finally had some time to wrestle with a knitting design that's taken over my brain. After a bit of futzing around I had a rough idea of a pattern jotted down; then it was time to set up my makeshift light table. (Who has the room for a real one? Not me. In a pinch, a 9x13" Pyrex baking dish over a headlamp does the trick.)

I played around with tracing and graphing until two things became apparent: one, that I've got a classic round-pegs-square-hole problem on my hands, and two, that I was spending too much time bent over a Sharpie. Whew. It seems this project requires more time, specialized graph paper, lots of swatching and, yes, maybe a pencil crayon or two in lieu of that marker. Oh, and finer yarn, and teeny-tiny needles. It's getting complicated.

Of course, I don't really want complicated: I want results. As much as I rail against "quick and easy" craft projects (and I'm in good company), I also know the feeling of wanting to hold the finished object in my hands without the hours of grunt work that must come first. I'm torn between wanting to be finished the design and wanting it to be great. I think I have a neat idea on my hands, and I want to see it realized, editing deadlines and paper-marking be damned. Then again, there's the old rule instilled in me by my dad: If it's worth doing, it's worth doing well.

I'll take my (wibbly-wobbly, timey-wimey) time, then, and settle, once more, for a mere preview of what's to come. 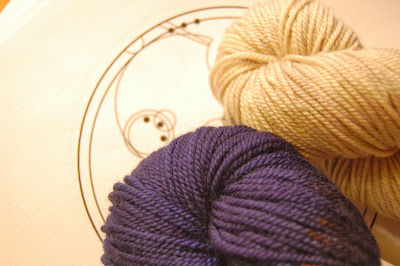