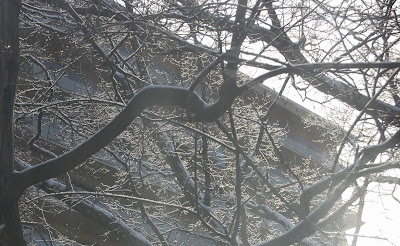 This morning, a common occurrence: the arrival of a mother and her seven-year-old daughter on a learn-to-knit mission. I used to dread this – I worried about giving the wrong answer and sending them in the wrong direction, somehow ruining knitting for two generations with one careless word. But three months in, I've come to love it. There's something exhilarating about all that potential waiting to be realized.

Now, I ask questions first, talk later. What do you want to make? What is your favourite colour? Which of these yarns is softer? Do you like to learn from a book? From a person? From a video? Every knitter is different, even the knitters who don't know how to knit yet.

The first time I learned to knit was on a Monday night in a Sunday school classroom; I was in Brownies. My teacher was older, Dutch, no-nonsense; the yarn was brown, acrylic, scratchy. The classroom was dimly lit – it was a winter evening, dark and cold. I was eight and I had a head cold. I struggled to concentrate; I wanted to learn but my nose was running and I couldn't hold the knitting needles and a kleenex at the same time. It was a conundrum.

The second time I learned to knit was from a book – an old book with black-and-white photos and a crackly plastic dust cover, with that musty sweet smell that old library books seem to have, the combination of dust and fingerprints. The yarn was from my mum's stash, in a range of colours that do a good job of dating my childhood: brown and rust and orange, with some cream and a bit of avocado thrown into the mix. The needles were yellow plastic, with the size – 5 – stamped into the grooved brown buttons on the ends. They lived in a marmalade jar, high on a shelf in the laundry room.

Today, I walked the mother and daughter through choosing yarn and helped them pick needles. The choices are overwhelming: five choices of purple, just for example. It's a big responsibility for a seven year old, requiring serious deliberation. Needles were easier: laminated birch, 4.5 mm, grey. Three sets the same, one each for mum and two daughters. Identical, so easy (and undetectable) to mix and match: handy if there's more than one kid involved.

Important lesson for daughter: what to do when you're finished knitting for the day. In the last month, I've seen four different boyfriends come in to replace broken knitting needles. "Someone sat on them," they say, sheepishly, holding up the unbroken tool as an offering. "Do you have a replacement?" So, lesson number one: knitting needles and chairs don't mix. She nodded, wide-eyed. Can she even imagine having a boyfriend to send for replacement knitting needles? Probably not.

Important refresher course for mum: how to make a slip knot and cast on. When is the last time you tried to explain a set of actions that are completely automatic? Now I remember my own mum showing me this, again and again, patiently tying and untying, casting on again and again, as I struggle to put words to unconscious action. A slip knot – that basic foundation for so much of knitting – turns out to involve half a dozen steps and innumerable subtle hand movements. We muddled through.

My first projects: endless rectangles. I made doll blankets, too-short scarves, lopsided teddy bears. Eventually, a garter stitch vest, in peach acrylic (two big rectangles, sewn together). None of it amazing, and yet all of it amazing: amazing because it was one thing and I made it into something else. It was amazing enough to keep me trying.

Their first projects: scarves. It doesn't get much more basic, or more satisfying, than that.

I've been knitting now for more than 25 years, through school and jobs and more school and more jobs and cross-country moves and innumerable trips. That I've been doing anything for more than 25 years still shocks me. The list is fairly short: knitting and writing and baking, the things I was interested in first, that I continue to come back to year after year. The three pursuits that give me the most satisfaction: equal parts challenging and comforting, all of them delivering on the promise that if you put the right components together with enough care, you'll end up with something greater than the sum of its parts.

But it's challenging to explain alchemy to a seven year old. Instead: simple tools, an old rhyme, and a little encouragement. It's OK to be frustrated; keep trying. Nothing worth knowing how to do can be mastered in 10 minutes. Stick with it, and you'll give yourself a gift you can enjoy for the rest of your life. It's a little bit like magic.
Posted by Austen at 11:44 PM