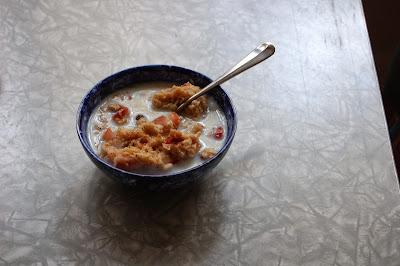 It was cold this morning: -1ºC. The air smelled like winter and the weather report called for snow, but the sky was absent that tell-tale touch of red. I made spiced apple oatmeal, and drank tea, and watched the day begin.

Combine dry ingredients in small saucepan. Pour boiling water over top and stir. Simmer over low heat 15 to 20 minutes, or until oats are plump, apple is soft and most of the water has disappeared. Serve with maple syrup and milk (or cream, if it's the weekend and you're feeling fancy). Serves one but is easily multiplied to feed a crowd.
Posted by Austen at 12:41 AM

Email ThisBlogThis!Share to TwitterShare to FacebookShare to Pinterest
Labels: in the kitchen, snapshots, writing