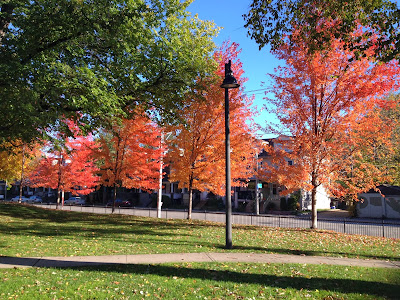 A couple weeks ago I had dinner with an old friend of mine who was in the city on business.

The last time we saw each other was over a year ago, and I was visiting her. I turned off the Trans-Canada and into town just in time to sit down with her family for dinner – pork tenderloin, corn and green beans, noodles. There was ice cream for dessert. Her sons, who were just a toddler and a newborn when first we met, are now young men, pushing six feet. I tried not to stare; tried not to repeat too many variations of "You used to be so small..." I wasn't particularly successful on either count, I don't think.

When we finished eating, we headed out again; out across the highway and into the countryside, to the dairy farm where her younger son boards his 4-H calf. It started to rain. I was wearing just a t-shirt, a denim skirt, slip-on Keds; I was completely unprepared. They managed not to laugh out loud at me as I tip-toed across the barnyard, slipping and sliding through the cow manure, or when I recoiled from the attentions of the dozens of curious barn cats. When the thunder and lightning started, I bolted for the car, secretly happy for a legitimate excuse to seek refuge from all that mess, all that life.

Home again, she and I stayed up late, sitting at the kitchen table, drinking tea from the old Pyrex tea pot and talking. The house was dark. The only illumination was from the fixture over the sink; the light spilled onto the floor in a golden pool. The streetlight out the window glowed sodium orange. We talked past midnight. We had a lot of catching up to do.

We had a lot of catching up to do this time, too. As I rode the rush-hour train downtown to meet her at her hotel, I thought about our last visit: how the town where I'd once lived had felt simultaneously so familiar and so strange to me. How I'd driven past my old apartments, peered into the window of my old office, walked the old familiar campus paths. How I'd watched that teenage boy work with his calf, and how confident and self-assured he'd been, and how somehow his calf had looked better, more special, than all the rest. How later, retelling the story of my farm visit to my friends at work, I'd watched them lift their feet off the floor in sympathetic dismay, imagining the mud and the manure, and how then I'd laughed, recognizing myself in them; recognizing the city-mouse caricature that I'd become.

We walked up Yonge Street to my favourite local pub. I'd estimated it would only take us twenty minutes, but it was more than half an hour. I'd forgotten how much there is to look at when you're seeing it for the first time. How bright the lights are; how many people there are; how close and loud and crazy they all seem. She pointed out businesses I'd forgotten existed. She asked questions about things I'd never wondered about, and questions I wasn't sure I had the answer to.

"How do you do it?" she asked. And "Do you like it here?" I hesitated too long before answering.

Once again we talked for hours. We had salads in order to justify the giant plate of fries. No dessert. The light was dim, but the space heater behind us was hard at work, so the pub was warm and cozy. The other tables filled and emptied, but we stayed on, until the fries were almost all gone and it was finally time to go. We caught the subway back downtown; it was full of the usual late-night characters, and there were empty paper cups and plastic bottles and discarded newspapers on the floor. In the darkened windows I caught a glimpse of my city-mouse self, operating in her element, navigating a different kind of mess, a different kind of life.

We hugged in the hotel lobby and went our separate ways. It will probably be a year before we see each other again, even though a year is too long. In the days since then, I keep hearing her voice asking me, "How do you do it? Do you like it here?" And then I hear the echo of my hesitation.

But this morning I rode the streetcar to work and I had my answer. Queen Street is quiet first thing on a Sunday morning, and the air was crisp and the sky was blue and there was time enough to walk to the coffee shop to buy a muffin from the guy with the wire-rimmed glasses who knows all the neighbourhood kids by name. I tucked the muffin into my bag and headed east, walking past the park, into the sun. Something about the light made me look up, and I saw those trees, and that lamp post, and the blue blue sky, and I smiled. I do like it, most of the time. It's like anything. You just have to know where to look.
Posted by Austen at 11:11 PM